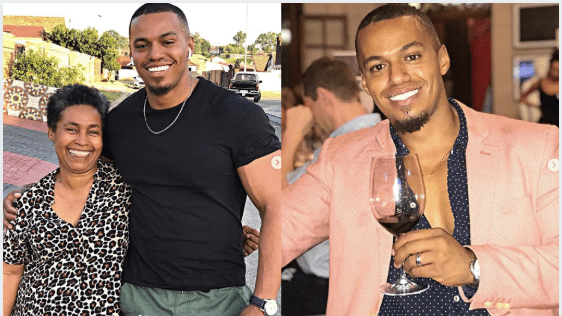 Cedric Anthony Fourie was born on the 17th of March 1990. He is a South African actor and well known for his role as Lehasa Maphosa on Skeem Saam Soapie drama. On the SABC 1 Soapie, Lehasa Maphosa is a wealthy businessman. He was born in Soweto, Gauteng, South Africa where he was born and grew up. He was raised by a single mother and has a couple of sisters.

Cedric is now one of the prominent South African actors.

Cedric served as a networking engineer but later he quit and followed his passion in the film industry. He is currently a very reputable South African actor who has built a highly rewarding career in acting. Lehasa Maphosa captured mzansi’s attention with his alleged relationship with Lasizwe. This followed after they shared very intimate pictures and videos on social media.

Cedric was raised by a single mother and has a couple of sisters.

The Skeem Saam actor is a father, he has a son who was born in 2015. His wife’s name is not known to the general public but he usually shares images and captions which confirm his marital status.

He is a pacesetter South African actors who have passionately walked up the career ladder to his fame.

No need to surround myself with motivational speakers when the motivation is always next to me. Eish but we need fresh hair cuts though.

He later got a bursary and ended up graduating from the University of the Witwatersrand as a networking engineer.

Landed roles in some of the South African TV Shows shows which includes Sokhulu & Partners, Harvest, Generations, and Isibaya, and eventually ended up joining Skeem Saam.His role as Lehasa Maphosa with the fifth season of SABC1 soapie Skeem Saam.

Are you one of the people who are asking the question, IsLasizwe Cedric Fourie husband? Lehasa Maphosa and Lasizwe left South African with speculations on their unconfirmed romantic relationship.

They use to share photos and videos that left some of their fans showing support as others express their disapproval of their relationship. Some of their fans had already made some conclusions that they were dating until Cedric and Lasizwe decide to come out. So far, none of the two has declined the relationship. However, the Skeem Saam actor pronounced his supportive stand on LGBTIQ+ citing rampant homophobia which requires more awareness. Below is a video of Lasizwe referring to himself as Cedric Fourie boyfriend.

Cedric has an estimated net worth of $1 million to $5 million which he has earned through acting career.

Happy birthday mama bear. ?❤️?? I love you so much.
You’re going to make one fine mother in law shem. You’re the prime paradigm of woman leadership. I am also it’s product. pic.twitter.com/gpNcBaNoDk

First day of home training. Fitness levels dropped a bit but it’s nothing I can’t regain soon. Had a blast. How are you spending your lockdown period?