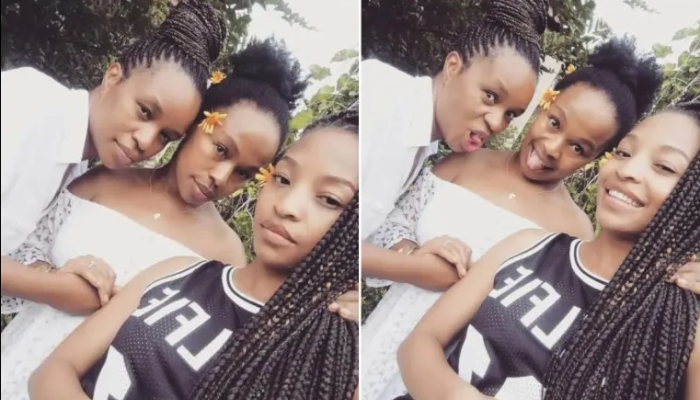 Sindiswa Dlathu (born January 4, 1974) is a South African actress and musician. She is well known for portraying Thandaza Mokoena on Muvhango, a role she played from the show’s inception in 1997 until her departure in 2018. Dlathu left Muvhango to play a leading role in the telenovela The River, where she plays the role of Lindiwe Dlamini-Dikana, a fierce woman, who would do anything to protect her wealth and maintain her lavish lifestyle. Social media is always blown away by the Dlathu sisters whose uncanny resemblance is quite remarkable.

Sindi Dlathu once sent social media into a frenzy after she shared pictures of her twin sister on social media. At the time people had no idea that she had a twin as she always keeps her life and family under wraps.

Even up to now, people can’t believe that Sindi has a twin sister.

Sindi and Zanele’s striking resemblances are so uncanny it makes it so hard for one to tell them apart when they are together.

As if that is not enough, their younger sister Tina also has striking resemblances to them. When they are together one would think that they are triplets.

The Dlathu sisters share quite a close relationship. Every time they leave Mzansi in awe as they serve some major sisterly goals.

Sindi and Tina are the most outgoing of the sisters and are already in the spotlight, whereas Zandile likes to keep to herself.

In one of their many adventurous outings, Tina shared a picture of herself with Sindi water rafting.

but she had fun and we are both safe

On the flipside, Sindi Dlathu is one of the most seasoned actresses in Mzansi. With an illustrious career spanning decades, Sindi Dlathu is best known for her on-screen character Lindiwe Dikana on Mzansi Magic drama series The River.

She is also well-known for her roles in Sarafina, Muvhango and Soul City.

Her little sister Tina is also following in her footsteps.

She recently bagged a role on The River alongside her sister. She plays the role of Khwezi.

In the storyline of The River, Khwezi is the youngest of the Hlophe children and she is the smartest and most obedient child.

She represents a South African born free who grew up in a traditional Zulu home with a strict father.

Aside from acting, Tina always loves expressing her creativity and is actively involved in doing digital content creation.