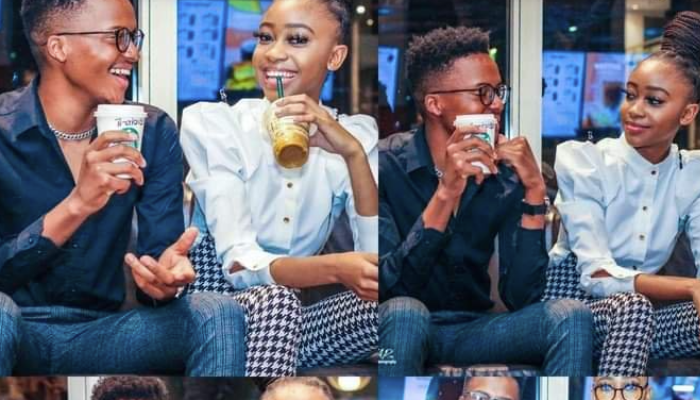 Who is Thabiso Molokomme?.Thabiso is a South African actor and television presenter best known for playing the role of Paxton Kgomo from Skeem Saam. He was born on 12 May 2001 in Polokwane, Limpopo, South Africa.

Read also:Sbonelo From Uzalo (Wiseman Mncube) Addresses Rumours That He Is Leaving Uzalo

Mosa Nkwashu is a South African model and actress but she is most famous as an actress, this was after joining the famous soapie, Skeem Saam. She is playing the role of being the daughter of the uptight police officer, Babeile, Lewatle Babeile. She is a young girl who inspires a lot of female youngsters who dream of being successful models and actresses. Back in 2018, she has crowned Miss Centurion Schools.

Mosa Nkwashu who is better known as Lewatle because of her given role on Skeem Saam and Thabiso Molokomme who plays the role of Paxton also on Skeem Saam officially dating.

On-screen, the two are notorious lovers who have each other’s back even when the other is in trouble.

At first, Paxton was not really into Lewatle but he was just using her to cover up for him when he has mischievously behaved at school and was on the verge of being suspended. In real life, Mosa and Thabiso are officially dating.

The two have been suspected to be in a relationship for a while now but they kept on denying it on social media and said they are only a brother and a sister. After months of denying being involved romantically, the two are out on their Instagram accounts making it official for everyone to see.

It is very much rare to find actors who are a couple on screen being a couple even in real life. I think this is one of the reasons some people say they would never date actors because they are more likely to catch feelings for their on-screen partners.

The two were out for coffee and made it clear even on their Instagram stories that they are romantically involved and they seem to enjoy themselves as they go out together.

This is such a beautiful union of two young people who are ambitious and determined to do great things in life.

The two are truly suited for each other because of their mentality and perspective toward life. They are both goal-driven and are looking forward to soaring to the top in both their acting and modeling careers.

Continue Reading
You may also like...
Related Topics:Paxton, skeem saam